Saltwater Gobies are very intresting creatures. From thier unusually beautiful colors to thier very intresting swimming style propelled and controlled by thier captivating fin movements. A bit challangeing to keep in the home aquarium as thier feeding habits include such in thier diet as Copepods and other live small foods which need to be supplied and or readily available naturally living in the live rock. It is again a bit challangeing but possible also to get them feeding on a frozen Mysis Shrimp diet which would help to keep the Goby easier maintained in he home aquarium.  I have one in my aquarium (more than 1 male will usually result in terretorial fights) with my Seahorses as they make excellent tank mates because they are all similarly slow moving and slow feeding as to have less food competition as this more evenly assures they will all have the same chance to eat as well as thier non-aggressive posture towards each other. 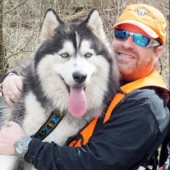 Being the Siberian Husky Lover that I am you know I love them Blue Eyes!! …
WooFDrivers Fish Tales
More

I have a whole school of Blue Acaras I recently added to my aquatic family. …
Uncategorized, WooFDrivers Fish Tales
More